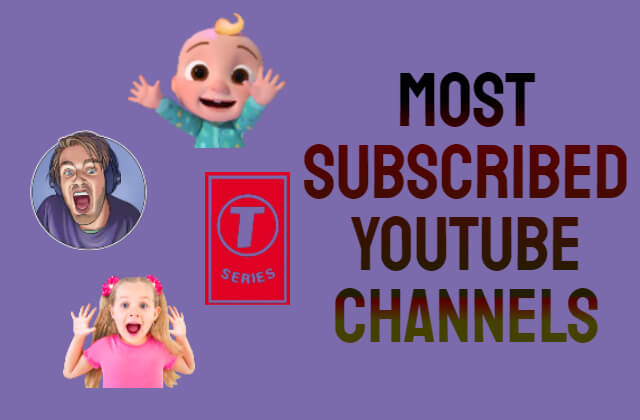 YouTube is huge. It is the most searched website, with over one billion users, and people spend countless hours on the site. It has also become a platform to become a YouTube superstar.

From cooking shows to streamers, YouTube offers videos on every imaginable subject. Below we’ve compiled a list of channels and YouTuber’s with the most subscribers.

For 1,920 days, PewDiePie was the most-viewed YouTube channel. And then came the T-Series, a record label and film production company from India. While PewDiePie did its best to stay one step ahead of T-series, it is now far behind. T-series is now the YouTube channel with most subscribers.

The content of the channel includes a huge collection of music videos, movies, clips and trailers of the creative edition of the T-series. Only time will tell if PewDiePie will ever win again.

In this list we have the only children’s channel that shows how many young children watch YouTube videos. Cocomelon has become quite an easy and convenient way for parents to entertain their children.

The channel itself has what the title suggests. A huge bank of nursery rhymes on a range of topics, with CGI characters and locations in comic book design.

Coming in at number 3 on this list is an individual YouTuber Felix Arvid Ulf Kjelberg, also known as PewDiePie.

Thanks to its rivalry with the world’s most popular YouTube channel T-series, PewDiePie is also among the highest earners on the platform.

PewDiePie ​​focuses on gaming, including live streaming. He blogs extensively, collaborates with other YouTubers, and runs his own meme review series.

Coming in at number 4, we have Sony Entertainment Television or SET, India.

Apparently owned by Sony, the Hindi channel is run by an Indian television station of the same name.

The channel offers what you expect from a TV station, including full episodes of TV shows, teaser trailers, and episode clips.

The channel focuses on a little girl named Diana. The content is focused on her live and what it is like to be a child (which I believe is always filmed).

Videos include toys unboxing, challenges, outings and other activities that keep children engaged. An idea that sounded weird a few years ago, but here we are.